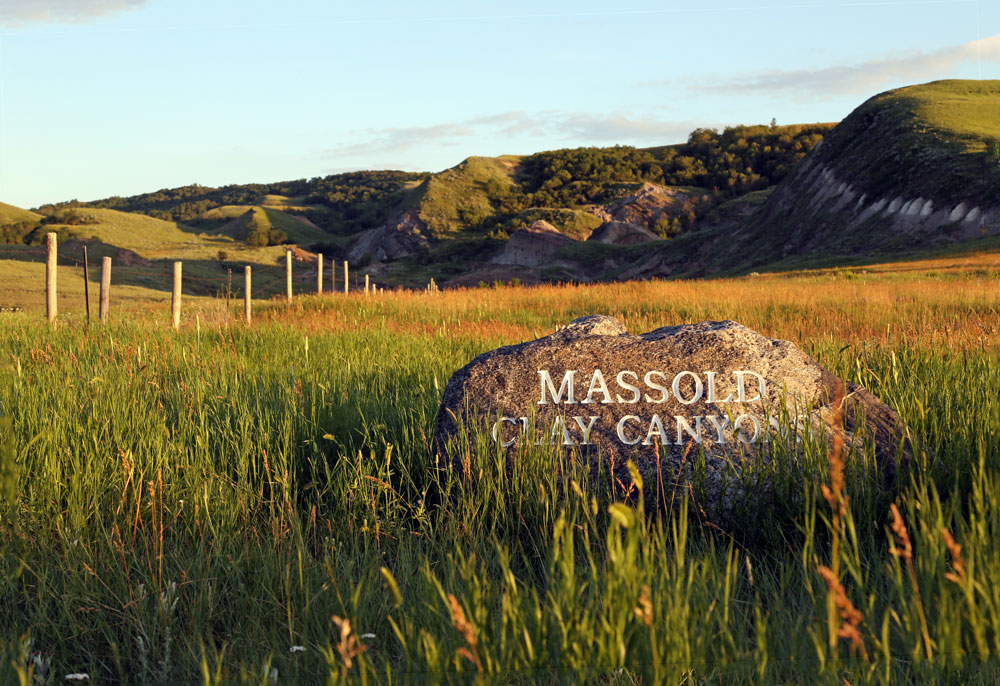 Hiking by Admissions only

The Claybank Brick Plant Historical Society purchased the 256 acre historic Clay Pits and wildlife area adjacent to the Claybank Brick Plant from Saskatchewan Environment Resource Management in 2001. In honour of the ‘Year of the Volunteer’ the Society decided to name the area after one of its dedicated volunteers and in this way honour all the Site’s volunteers past, present and future. 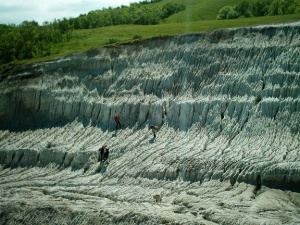 Since this land has never been broken by farmers, many of the plants are indigenous to the area. Much of the landscape has been in place since the last glacial age, the Wisconsin, which retreated approximately 10,000 years ago from the Plains region. Despite, the similar landscape, there have been some major changes to the flora and fauna. For example, much of this land was probably covered in forests for a few thousand years, but as the climate became warmer and drier in the past 2,000 years, the forests began to disappear and the grasslands began to expand northward. Along with the changing flora, many of the animals where also becoming extinct. For example, when the first peoples came to north America approximately 12,000 years ago, much of the land far into the southern states was still covered over in ice.These people lived by hunting large woolly mammoths, woolly rhinos, and giant bison. These animals are now extinct, as is much of the fauna they needed to live on. 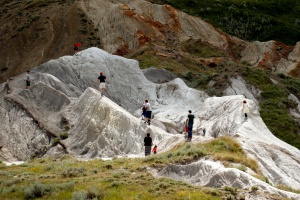 First Nations peoples of 2-3,000 years ago, would subsist on both animals and plants. In this area, there was no agriculture, so people lived by a method called “hunting and gathering”. As you can probably guess they hunted animals like Bison, deer, antelope and so forth. Not only did they hunt large animals but they hunted small animals like rabbits as well. Like people today, First Nations peoples had to eat their fruits and vegetables. But instead of going to the local grocery store, they would walk out onto the prairie and gather the fruits and vegetables that nature provided. Some of plants that we will see along the way include: crocus, sage, roses, cat-tails, willow, puffballs and other mushrooms, Buffalo-berries (yellow sweet peas), skunk cabbage and probably a few others. Plants like wild onions, yarrow, saskatoons, wild strawberries, gooseberries and so forth can be found in the surrounding area. Many of these plants were used as food, while other plant provided important medicines.

For example, puffballs could be eaten, or when dried they were used to stop bleeding. The inside bark of Willow was used to make a tea which would relieve pain. In fact, willows produce acetacylic acid that is the main ingredient in Aspirin. Other plants like wild onions and sage were used as seasonings. Sage was also used for purification before and during different ceremonies. Berries like saskatoons, gooseberries, strawberries could be eaten off the bush or preserved and used later. Rosehips contain a high amount of Vitamin C, so they were eaten to prevent various diseases. Sometimes a ‘tea’ was made from the stems and parts of the root. This tonic could be used to treat eye inflammation. 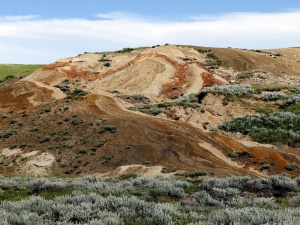 Even the damaged outer skin of some rosehips was used in a paste to treat burns. As we can see, First Nations peoples took advantage of what Mother Nature provided. Although it seems that there isn’t enough plants here to sustain anyone, we must remember that First Nations peoples of the Plains were nomadic. This means that they moved around a lot and that they would be gathering the plants from a number of localities in order to get a good supply of plants for medicines and so forth. 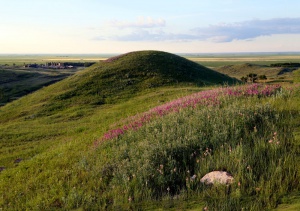 What is geology? Geology is defined as” the science that investigates the planet on which we live, the rock of which it is made, and the history that it has had. Geology deals with the landscape and with mineral resources. It investigates the changes that have taken place over millions of years and the changes that are going on today…” (Gordon, 1976 p.1)Geology is responsible for the landscape we see around us. Geology is also responsible for where people live, the names of places, development of industry such as local potash plants and as is the case here, it is responsible for the development of the Claybank Brick Plant. If we look around, we see different coloured bands of soil; these bands are variant types of clays that are found throughout the Whitemud Formation.

Long before, people inhabited North America; or even before North America was North America, the land was one giant continent. During the earliest times of the Paleozoic Era, the area that is now Saskatchewan, was situated near the equator. At this time, the province was covered over by shallow tropical seas. These seas would retreat and erosion would also occur in these regions. It is during this time that many of Saskatchewan’s mineral deposits were laid down. It was also a time from which we can trace the emergence of many plants and “hard-shelled animals”. 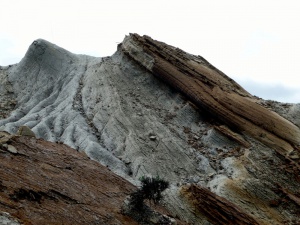 Various shale and limestone deposits throughout the province contain fossils that are from this era. The next era is the Mesozoic, and it is here that we have the development of birds and mammals; and of course the dinosaurs. This is also when the sea “completely withdrew from Saskatchewan”; leaving behind many of the plant and insect species that exist, in part, today. This era has four periods including the Permian, Triassic, Jurassic and of most importance to this area, the Cretaceous. Throughout this era various types of limestone and shales were forming, including the remains of various plants and animals. The cretaceous is one of the longer periods in geological history; it is during this period that we have the development of what is called the Whitemud Formation. The Whitemud Formation is the geological name for the whole picture of what/when the Claybank Hills are and were formed.The Whitemud Formation is noted for the clays which are deposited in a number of areas of Saskatchewan including Claybank. There are two types of clay in the formation; one is white and the other is grey in colour. Each colour of clay possess different properties and can be used to create different types of products.Here at Claybank, the clay is considered ‘high-refractory’ which means that it has excellent heat and pressure bearing properties which makes it suitable for products like face brick, tiles, fire brick, insulating brick and so forth. When we get down into the plant you will be able to see some of these products. 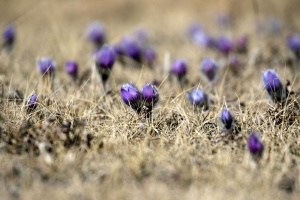 Although much of the clay that was used in the early manufacture of bricks came from these hills, there are also deposits of clay in the nearby Dirt Hills. The clay in these hills is often a “bentonitic clay”. This type of clay contains decayed particles of volcanic ash from Cretaceous age volcanoes. This clay has a greasy/soapy feel when wet.

After the Cretaceous period, and the laying down of these hills, along came the Cenozoic era. During the tertiary period of this era, Saskatchewan became wetter, thus swampy. During this time period we have lush floral growths that would later become the coal beds of Southern Saskatchewan.Finally, we come to the period in which we live. We are currently living in the Quaternary period of the Cenozoic era. Granted, a lot has changed since the beginning of this era approximately 15-16,000 years ago. This period is marked by the glaciation of North America. As you have guessed, through the previous era, the plates that once made up the giant continent have broken apart and have moved into the current geographical positions.

Back to glaciation. Much of North America was covered by glaciers right down into the Gulf of Mexico. There were various stages of glaciation in which the ice sheets retreated and advanced. As mentioned at the beginning of our tour, the final glacial period of the Wisconsinian is of greatest relevance when discussing the peopling of North America.

Now that we have looked at the geology of the area as well as the earliest human history of the area, we enter into the recent history of these hills. As we have already talked about, these hills have been occupied for a long time by various First Nations people. It is likely that First Nations people utilized the clay resources as well, since pottery was being on the Plains for a couple thousand of years. However, we are now concerned with the commercial development of the clay resources. One question remains. Who “discovered” the clay that lead to the development of the brick plant? According to local history and ownership, the clay resources were “discovered” in and around 1886 by Thomas McWilliams. McWilliams, along with friends and various family members were reported out searching the area for some lost cattle and picking saskatoon berries. While venturing into the hills, McWilliams became aware of the outcroppings of clay. The clay is evident from a distance today due to erosion and past mining, but it is very likely that the striations of clay were not evident in those days. At any rate, McWilliams realized the resource that lay there and he also realized the economic potential. Well, McWilliams headed into Moose Jaw from his original homestead that was located by the Moose Jaw Creek. He was headed for the land titles office, and once he got there he laid claim to the land that contained the clay outcroppings. In accordance with the rules for establishing claim to land, McWilliams moved his family to this new site, and established a new homestead. True to the rules and regulations of the time for establishing claim a ‘house’ and fences for livestock were built. Apparently, part of the land was even broken and cultivated to facilitate some kind of cropping or a garden. We know from present agriculture that the hill’s clay content was not conducive to farming, which is probably just as well for McWilliams. Why? Because it appears that McWilliams’ goal was to mine clay from the hills and sell it to the established Wellington White brick plant in Moose Jaw. 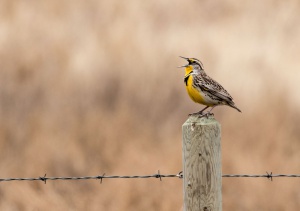