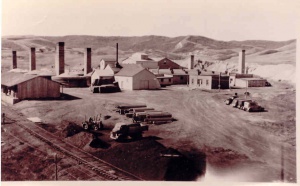 Only the local residents recalled the former glory of the Claybank Brick Plant. They remembered how so many producers depended on Claybank bricks in decades past. The plant provided a livelihood to many families in the district, south and midway between Regina and Moose Jaw. That same rural network relayed news of the plant’s imminent closure to the Saskatchewan Municipal Government’s Heritage Branch. By the time the plant ceased operation in 1989, the Heritage Branch and the owner, A. P. Green Refractories Ltd. sat down to discuss the site’s future. To ensure there would be a future worth discussing, the provincial government worked with the owner, who donated the property and buildings to the Saskatchewan Heritage Foundation in 1992. Today, not only is the Claybank Brick Plant stabilized, but people are actively planning for its renewal. Designation as a National Historic Site in 1994 hasn’t hurt its cause any. 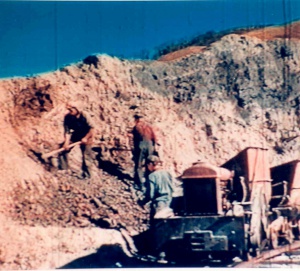 The community has embraced the Claybank project with enthusiasm. Equally impressive is the trail blazing co-operation between volunteers and the heritage staff. When the Heritage Branch and Foundation were unable to proceed swiftly on Claybank, the Claybank Brick Plant Historical Society stepped forward and both groups have toiled to “prove up” this historic property and restore its significance. They make a powerful team.

The Early Years (1886-1904)
The first record of clay deposits in the Dirt Hills was made in 1886 by Tom McWilliams, a local homesteader, when he applied to the federal government for permission to mine the clay. At this location he found a rare and rich deposit of ”refractory” or heat resistant clay. Refractory clay is therefore particularly well suited for manufacturing fire bricks, which in turn are used in fireplaces, and to insulate boilers, furnaces and any area where extensive heat is generated.

McWilliams extracted clay on a sporadic basis over the next several decades, and apparently sold his product to brick manufacturers in Moose Jaw. He entered into a formal agreement with the Moose Jaw Fire Brick and Pottery Company shortly after that firm was established in 1904. 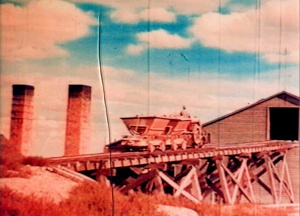 The new company acquired McWilliams’ homestead property plus other nearby clay deposits. However, hauling the clay by horse and wagon some 50 kilometres from the Dirt Hills to Moose Jaw was a major drawback to any serious development of this property.

Construction of a Canadian Northern Railway line through the region in 1910 had a significant impact on the clay deposits. Plans were now put into operation to construct a brick plant next to the major clay deposits, thereby eliminating the need to haul clay to Moose Jaw. Upon establishment of the town of Claybank along the railing, a spur line from the plant site to the town gave the company shareholders direct rail access to markets for their products. However, in order to proceed with their plans, the company first reorganized under a new name — Saskatchewan Clay Products — in 1912, and bought out Tom McWIlliams’ shares. 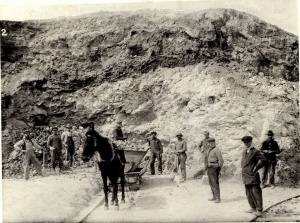 Saskatchewan Clay Products (1912 to 1916)
Construction of the brick plant was initiated in 1912 and completed by 1914. However, a combination of economic recession in 1913 and the start of World War I the following year resulted in plant closure until 1916, when the operation was reactivated. Shortly thereafter, the company re-organized again, this time under the name “Dominion Fire Brick and Pottery Company”.

Dominion Fire Brick and Pottery Company (1916 to 1954)
When brick production recommenced in 1916, the new management also added a new type of brick to the product line: face brick. This kind of brick was used for building construction, and the face brick subsequently produced at the Claybank plant was featured on some of Saskatchewan’s most prominent public buildings. Many schools, churches, court houses, government and commercial buildings, hospitals, theatres and private residences were faced with the attractive T-P Moka or Ruff-Tex brick manufactured at this plant. The quality of this brick became so well known that even the new central tower of Quebec City’s Chateau Frontenac was faced with Claybank brick.

In many ways, these were the Golden Years for the brick plant. The railways and industrial sites placed a high demand on their stock of top quality fire brick. As well, the new lines of face brick, though a secondary product to the company, rapidly caught the public’s eye and became a popular building construction item. Having built up an extensive clientele and varied product lines during the 1920s, the company was able to survive the subsequent Great Depression of the 1930s.

By the 1950s, the Claybank brick plant was reported to be the largest clay products plant in Saskatchewan, surpassing the other two major facilities at Bruno and Estevan. 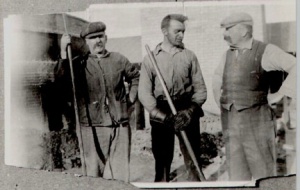 Dominion Fire Brick and Clay Products (1954) Ltd. (1954 to 1971)
In 1954 the Claybank facility was sold to Redcliff Pressed Brick, an Alberta company, and management of the firm transferred from its Saskatchewan-based founders. The next year A. P. Green Fire Brick Company, of Mexico, Missouri, bought a controlling interest in Redcliff’s Saskatchewan operations. Meanwhile, post-war changes in industrial use for refractory brick had reduced the company’s share of, or completely eliminated, some markets – particularly the locomotive refractory brick, which became obsolete with the railway industry’s conversion to diesel engines.

During this era six of the ten old coal-fired down draft kilns were converted to gas heat. This improved the efficiency of the fire brick operation, but the ultimate closure of the coal-fired kilns made it impossible for the company to manufacture the same high quality T-P Moka face brick, which depended on impurities in the coal for its colour. Since A. P. Green was not particularly interested in manufacturing face brick, this product line was discontinued in the 1960s. 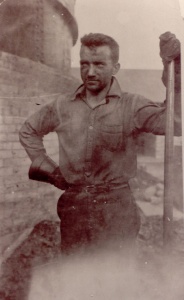 A. P. Green Refractories Ltd. (1971 to 1989)
In 1971, North America’s most extensive producer of refractory brick formally bought the Claybank operation as part of its corporate restructuring. Now known as A.P. Green Refractories Ltd., the company managed brick plants around the globe, and continued to produce fire brick from its Claybank facility until 1989, when corporate downsizing resulted in close of the entire Claybank operation. The facility was then offered to the Saskatchewan government, which accepted the donation in 1992 through the Saskatchewan Heritage Foundation.

Conclusion:
The Claybank Brick Plant was a successful Saskatchewan-based small industry, specializing in the production of refractory brick. The company’s initial success appears to have been due to a combination of skilled management, continuity of key personnel, and development of high quality refractory brick products, interspersed with other quality products such as face brick. Ultimately, reorganization of the brick market, and changes in technology forced the plant to close, after almost 75 years of continuous operation. Although some modernization of the plant has occurred over time, most of the brick plant still demonstrates the effective use of efficient 19th century brick manufacturing technology throughout most of the 20th century.

Acknowledgement:
This history is based on a 1992 research report entitled “The Development and Operation of the Claybank Brick Plant: 1886-1989” by Saunders, Richan and Associates.